HOUSES OF THE MONTH 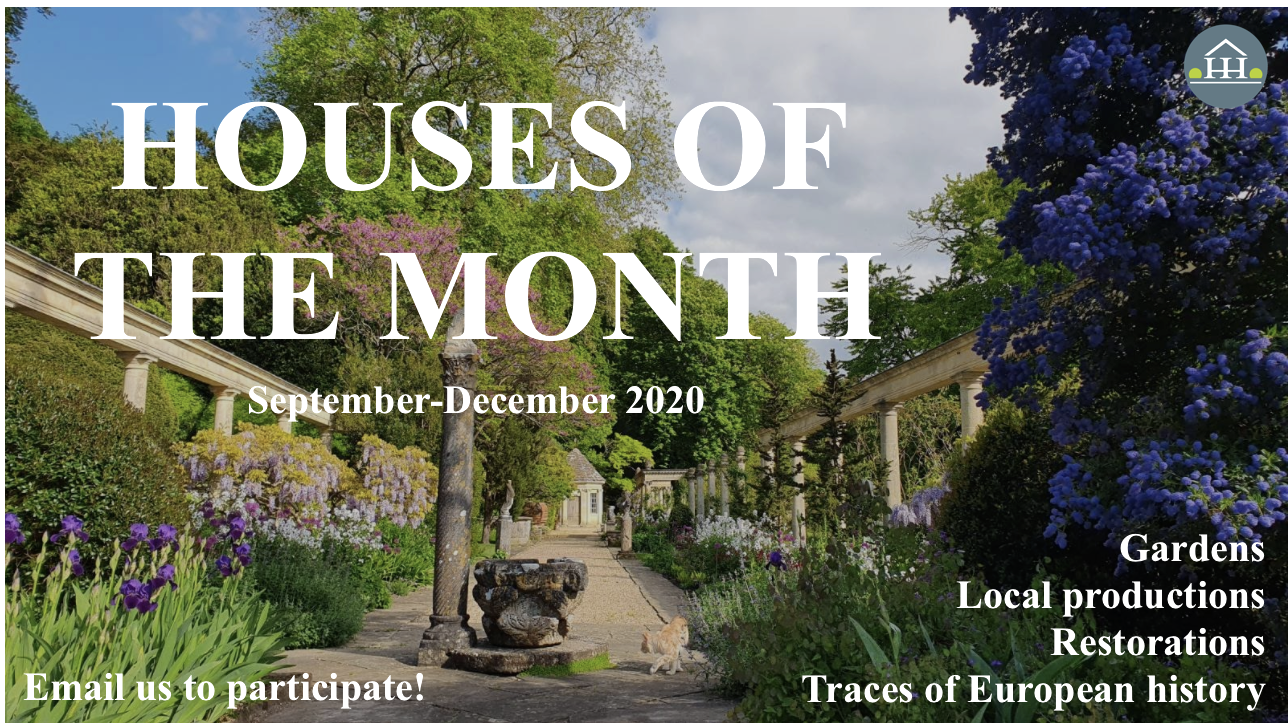 Houses of the Month – Online Event!

Drawing on the success of our last online event, ‘European Heritage Weeks – Facebook Live Visits’, we are ready to show more of our great European private heritage. We have thus decided to combine our previous initiative – ‘the House of the Month’ – and the current trend for online events.

Representing +50.000 private historic houses, EHH will introduce some of its treasures from all over Europe. ‘Houses of the Month’ is an invitation to take part in a new journey through the cultural heritage premises.

With this new project, we want to offer our audience more than a basic guided tour. We want to spotlight the passion, talent, courage and hard work of our owners, as well as the importance of such buildings in our common History.

From September to December, we will introduce our private historic houses, addressing one specific theme each month, through the broadcasting of 20-minute long videos. The four themes are as follow:

The first theme to be addressed – in September – will be “Gardens”!

More information about the program will follow soon: stay tuned!

Willing to participate*? E-MAIL US!

Knowing anyone willing to participate? Tell them to E-MAIL US!

*We will only accept applications from our members and their members, but the visits will be accessible to everyone!

The first month of our virtual project has just finished and it proved to be a real success.

Both the descriptions and virtual visits will be available below, for those of you who missed the opportunity of discovering these cultural gems.

The Villa and its garden were built at the end of the 18th century at the behest of the Guevara di Bovino Dukes. In 1781 Ferdinand IV of Bourbon, King of Naples, granted the Duchess Anna Maria Suardo Guevara di Bovino the privilege of a supply of water from the waterfall of the neighboring Reggia di Caserta for the irrigation of her garden. The garden, which covers about two hectares, was initially conceived and designed following geometric patterns, according to the model of the Italian gardens. A few decades later, the original geometric feature was altered with the planting of the camphor tree and the tulip tree, both left grow spontaneously without any pruning. The mix of Italian rigor and English informality was then perpetuated with the planting of the camellias and the acacias. Modern landscape concepts prompted the Duchess to annex the adjacent grove of ancient holm oaks to the ornamental garden, creating a shady and romantic picturesque walk. Of particular botanical interest is the presence in the garden of the Camelia japonica “Atroviolacea”, a precious ancient camellia with a beautiful purple color, which is thought to come from the important collection of camellias of the Reggia di Caserta. Be ready to visit and learn more about this jewel of Southern Italy!

The castle and its gardens, classified as one of Wallonia’s major heritage sites, are located along the Meuse, surrounded by a wild and untouched nature and opposite to rocks (paradise of alpinists) looking down upon the river. Dating back to the Middle Age, Freyr was a keep given in fief by the Count of Namur to Jean de Rochefort Orjol in 1378. The granddaughter of the latter married Jacques de Beaufort in 1410. Their descendants have kept the estate until the present. Starting in 1760, the castle was converted into the summer residence for the Beaufort-Spontin dukes and the gardens were redrawn in classical style.

The Pazo de Santa Cruz de Ribadulla, near Santiago de Compostela (Spain), is a property belonging to the same family since the beginning of the 16th century. It is well-known for its avenues of centuries-old olive trees, its collection of Camellias -the oldest in Spain- as well as for its many catalogued centenarian trees. In 2018 Casas Históricas y Singulares, the Spanish Historic Houses Association, awarded the garden of the Pazo de Santa Cruz de Ribadulla with the Gardens Conservation Price and in 2020 the International Camellia Society certified it as a Garden of Excellence.

Villa La Riniera was built in the mid-19th century as the country house of the Marquis Rusconi of Bologna. Then it was bought by and belonged for 60 years to Giuliana Gardi, who in the 2000s bequeathed it to her great-granddaughter Niccolò Malaspina and his wife Lucia Romani Adami. For ten years now, in the fields adjacent to the villa, the Malaspina have set up a flower-nursery company specialised in the production and sale of peony plants and flowers. Today the plantation covers about 4 hectares and includes over 300 varieties of peony, with more than 40,000 peony plants that produce about 150,000 stems and 3,000 new plants every year. The flowering season goes from early April to the second half of May. 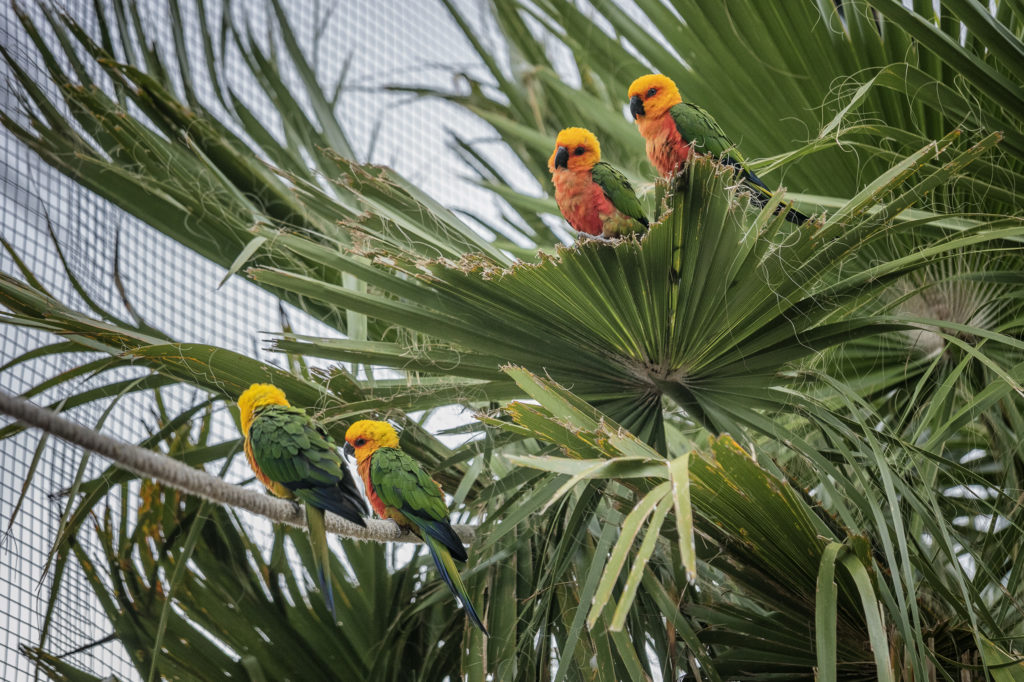 Parc Samà is a historical, botanical, and zoological garden declared a BCIN (Bé Cultural d’Interès Nacional – Cultural Asset of National Interest). The Park was created and promoted by Salvador Samà i Torrens, Marquis of Marianao, renewed Spanish politician and heir to a Catalan family previously established in Cuba. The project was commissioned in 1881 to Josep Fontserè, author of the Park of the Ciutadella de Barcelona and with Antoni Gaudí as an assistant. Parc Samà is an eclectic garden that combines opposite styles such as Italian Renaissance or English Romanticism. The 19th-century gardens typically contained collections of animals, such as deers, pheasants, and peacocks. In the case of the Parc Samà, and following the idea of its founder Salvador Samà i Torrens to recreate a garden that would transport the visitors to colonial Cuba, the park housed different collections of exotic animals, among which the birds brought from Central America stood out. Today’s Parc Samà recovers this dimension and reflects Salvador Samà’s passion for collecting ornamental exotic birds, but adapts this concept to the XXI century, where animal welfare is the absolute priority. Thus, the animal collection of Parc Samà is a fine example of good exotic animal husbandry, where visitors can admire, understand and enjoy the world of birds, turtles, deers, and other rare species. 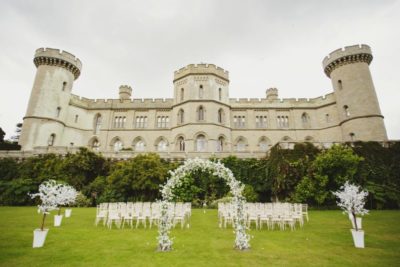 Eastnor Castle lies in Herefordshire at the foot of the Malvern Hills on the edge of the Cotswolds. Surrounded by a beautiful deer park, arboretum and lake, Eastnor Castle is the home of the Hervey-Bathurst family.
Besides being a fascinating and award-winning visitor attraction, Eastnor Castle fulfills other roles as an exclusive-use wedding venue, corporate team building venue, and private party venue, as well as a venue for product launches and location filming. Eastnor Castle also supports the local community in a variety of ways. 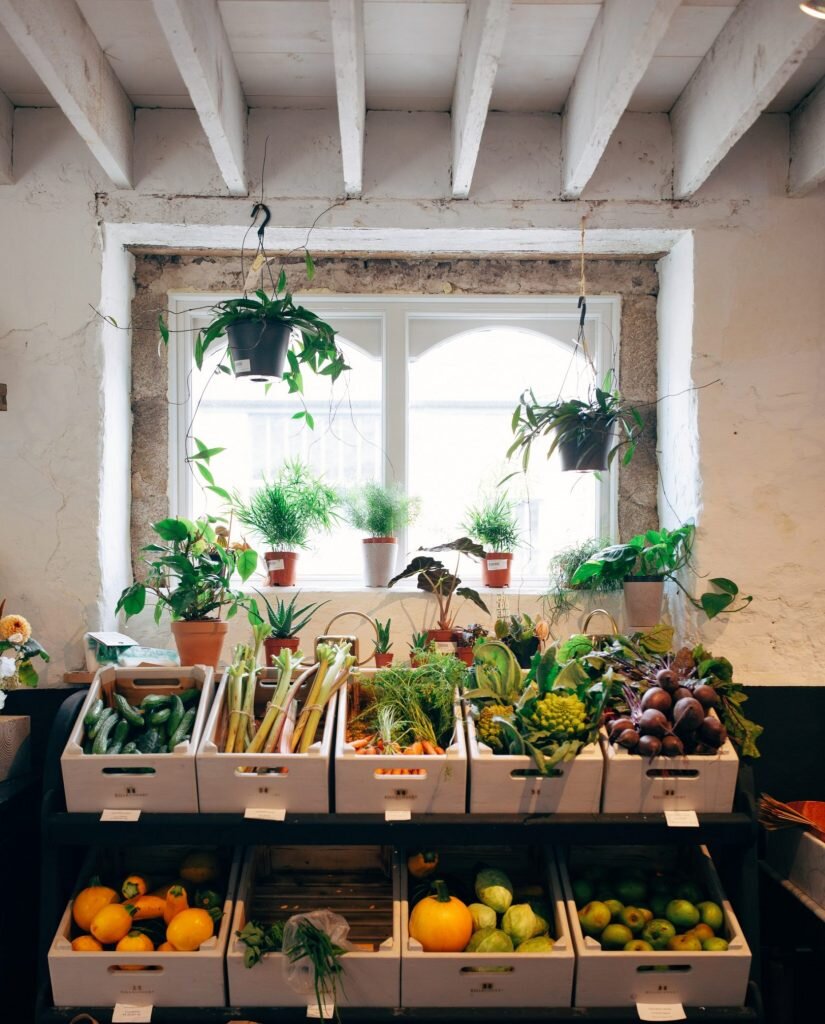 “We produce chemical-free vegetables, fruit, cut-flowers and free-range meats for our Farm Shop and all our ‘garden-to-plate’ menus in the Grain Store Cafe and Tea Room.
Over the past decade, we have responded to the challenge of preserving the House and Gardens by transforming Killruddery into a popular visitor attraction on Ireland’s Ancient East, a working farm and a private hire venue for Weddings and Corporate Events. However, at the heart of this enterprise, we wish to protect Killruddery’s soul and unique character as our special family home”.
– Anthony and Fionnuala Brabazon, Lord and Lady Ardee
HOUSES OF THE MONTH – VIRTUAL VISITS
This website uses cookies to improve your experience. We'll assume you're ok with this, but you can opt-out if you wish.Accept
Privacy & Cookies Policy
Necessary Always Enabled