Rewatch the 2021 season of Facebook Live Visits on our Youtube Page and stay up to date on the next edition !!! 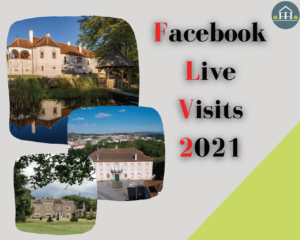 Given the success of last year’s virtual edition of the event and see the extension of the travel restriction measures across Europe, this spring the European Heritage Weeks took place online once again.

The format did not change: over four weekends between April and May, some private owners from different corners of Europe opened and presented their historic houses on the EHH social media through short virtual live guided tours. In this way, the owners were able to promote and enhance their houses even during this difficult period while people from all around the world had the chance to travel and discover our invaluable European private heritage sites while staying at home.

On Saturday the 17th of April at 15:00 CET, the first round of the event took place and three houses have been presented: Antouaniko Mansion (Greece), Ballykilcavan house (Ireland) and Amadé-Bajzáth-Pappenheim castle (Hungary). The first round of live tours has been introduced by the EHH Executive President, Alfonso Pallavicini. The participants in the following rounds were from Finland, Romania, Austria, France, Portugal, Italy and Sweden. While waiting impatiently for being able to physically travel again, follow all the updates about our flagship event on this website and Facebook page . Do not miss this great opportunity to travel around Europe while remaining at home! 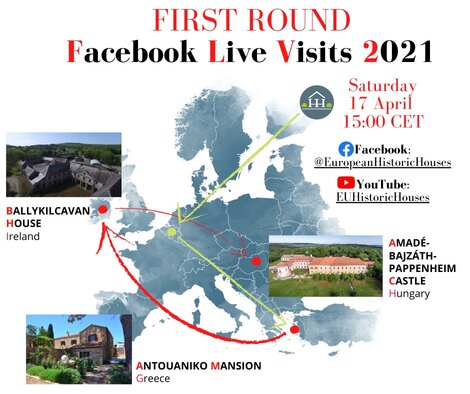 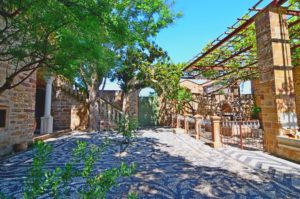 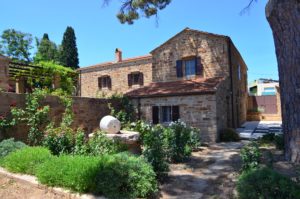 Antouaniko is a characteristic mansion of Kambos area, on the aegean island of Chios, in Greece. The estate comprises a historic tangerine and orange trees plantation, together with the main house, the pebbled yard, the irrigation system and auxiliary buildings. Mansions in Kambos were first created in the Genoese period, until the mid 16th century. The area flourished in the Ottoman years to reach a new heyday at the end of 19th century. 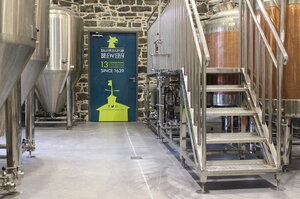 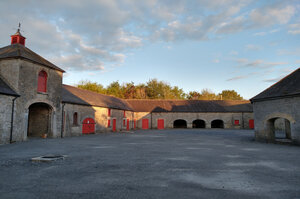 Ballykilcavan Brewery is based on Ballykilcavan Farm in the heart of Ireland.  The farm has been the home of the Walsh family for 13 generations since 1639.  The brewery is installed in a renovated 240 year old grain store, and the family are currently converting two adjoining buildings into a visitor centre and tasting room. 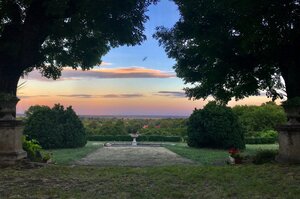 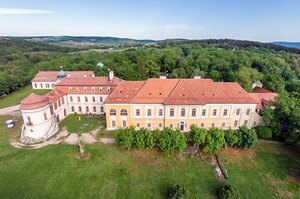 The oldest part of the Amadé-Bajzáth-Pappenheim castle  was build up in 1700 and every generation added some wings and parts. The whole estate was socialized from Count zu Pappenheim and his family in 1945 and after that looted  totally.  Till 1980 the chateau was used for different purposes; military hospital, school, post office, police, local government offices, movie theatre, pharmacy, apartments etc. In 1982 the Hungarian State emptied the chateau because the building was in life danger state. Some renovations took place but there was no use for the chateau after it was renovated. The main building (in the former children wing there is still local primary school working) was left empty and abandoned for thirty years. In 2012 Mr Ari Kupsus rented the empty chateau from the Hungarian State and started to save this wonderful cultural heritage and fill it’s walls with pieces of antique and culture. Today the chateau is the only chateau in Hungary that has been decorated for the living purposes with the periodical furniture, paintings and decoration items, all from the 1760-1860’s. 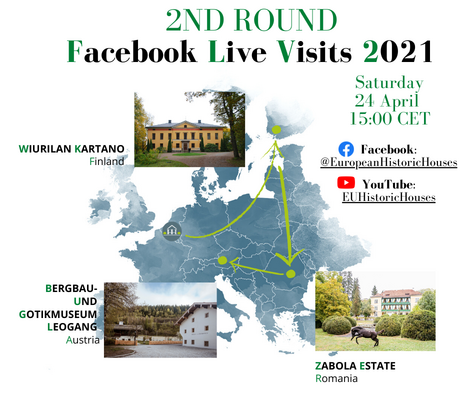 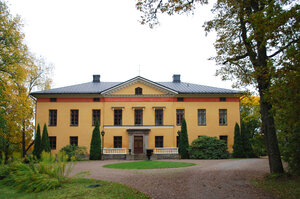 Wiurila Manor is in southwestern Finland.  Wiurila Manor is mentioned in historical records as early as the 15th century . In the late 18th century the manor was acquired by the renowned Arminoff family. Anne Marie Aminoff is the 7th owner from the family. 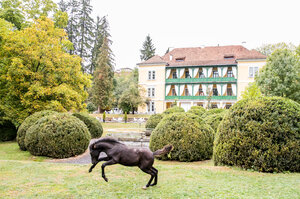 The history of the Mikes Estate of Zabola dates back to the 15th century and has been in constant change since than due to the turmoil of Transylvanian history. In 1949 the estate was nationalized, and the family thrown out. The castles went through a row of functions starting from being the holiday home of the Communist National Press Association, school and sanatorium.  The property was revendicated by the Roy-Chowdhury family (the successors of the Mikes’) in 1999. Some of the buildings together with the surrounding widespread English garden currently serves as a boutique hotel. 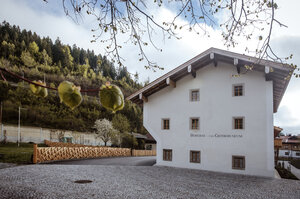 The Thurnhaus is a medieval residential and defence tower from the 13th century. Until 1504, this tower used to be a frontier post at the border between the Archbishopric of Salzburg and the Duchy of Bavaria. The tower was carefully renovated by the Leogang Mining Museum Association in 2019. 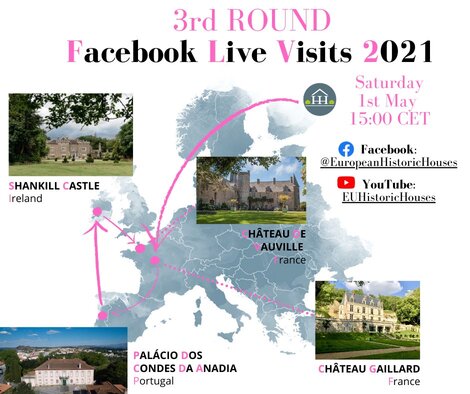 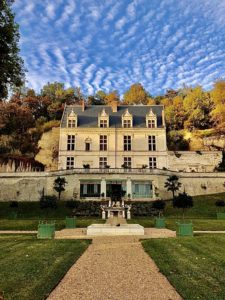 “The most Italian Château of the Loire Valley” in the words of its owner, the French entrepreneur Marc Lelandais. The latter purchased this historical royal domain and reopened it to the public in 2014 after four years of renovations. The palace was built in 1496 by King Charles VIII of France, after his first Italian campaign. Fascinated by the Italian artistic and architectural beauties, the King returned with 22 artists known as “Gens de Mestier” to give foundation at his place, in Amboise, to the French Renaissance. Among the others, Pacello da Mercogliano, the most famous master gardener in Europe, was asked to create here what then became the first French Renaissance garden: here the first orange trees in France were acclimatised and the first orangery (“limonaia”) was erected.
15:20 – Palácio dos Condes da Anadia Mangualde (PORTUGAL) 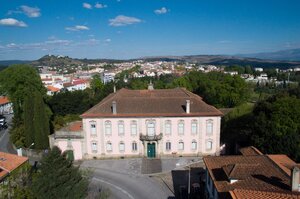 This manor house, situated in the Portuguese county of Viseu, was built by Simão Pais do Amaral at the beginning of the XVIII century and is today one of the finest examples of the Baroque architecture in the region. The palace is still owned by the Pais do Amaral family. The estate comprises a manor house, an historical garden and an ancient woodland planted in the XVIII century as well. The palace still keeps most of its original features and hosts a relevant collection of paintings and sculptures as well as some magnificent pieces of tile work.
15:40 – Shankill Castle (IRELAND) 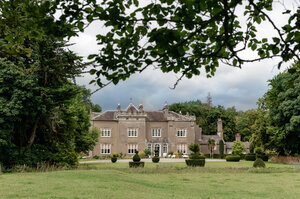 Shankill Castle in Co Kilkenny, Ireland, is the home of artist Elizabeth Cope. Both traditional and eclectic, the house is filled with antiques as well as contemporary art. The castle originated as a tower house, but was rebuilt in the Queen Anne period by Peter Aylward in 1708. It was extended and castellated in 1850, and sits within landscaped gardens. 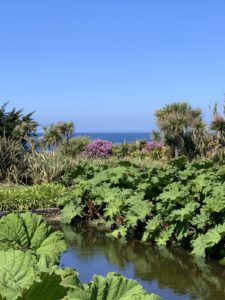 At the end of the Cotentin (Normandy), against all odds, hides an incredible oasis of over 1,000 species of plants from the southern hemisphere. Covering more than 4.5 hectares (10 acres), the Botanical Garden of  Vauville is a journey into the world under the Norman latitudes: around the magnificent castle (from the XIIth and XVIth Century) walk through a succession of green rooms as exotic and surprising, discover the palm groves of trachycarpus fortunei from China, the moats and their royal ferns from Tasmania, the impressive pool of gunneras manicata from Brazil, the eucalyptus in the “garden of wisdom” or the scents of the “exotic garden”. 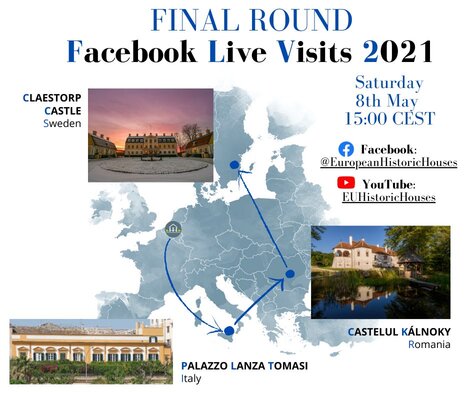 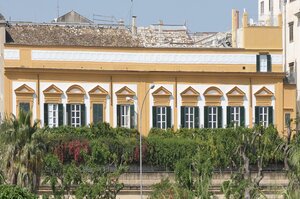 Palazzo Lanza Tomasi overlooks Palermo’s stunning seafront. It was built at the end of the 17th century atop the 16th century Spanish city walls. The palazzo was the last home of Prince Giuseppe Tomasi di Lampedusa, the celebrated author of “The Leopard”. His adopted son, Gioacchino Lanza Tomasi, unified the whole property and lovingly restored it. The palazzo houses the historical library of the author, a series of documents and portraits of his family as well as all of his manuscripts, including the original manuscript of “The Leopard”. 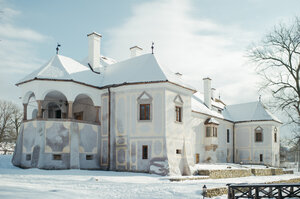 Tibor Kálnoky, who belongs to the 25th generation of this historical family from Micloșoara, decided to leave the West where he was born to establish himself in Romania, where in turn his family was exiled from during the communist period. His goal was to save his family’s valuable architectural heritage, a castle comprising several different properties which evolved from an ancient estate probably built by Bálint Kálnoky around the end of the 16th century. 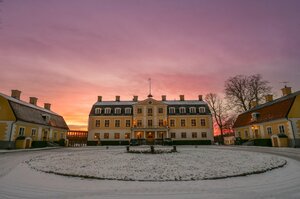 Welcome to Claestorp, an estate situated 2 hours SW of Stockholm, Sweden. Claestorp can be traced back to 1434 and has never been sold since then, only inheritated within the family. The present manorhouse was built between 1754-58. Claestorp is 4.600 hectars and the main line of business is forestry, agriculture, real estate, shooting, hydro- and solarenergy production.